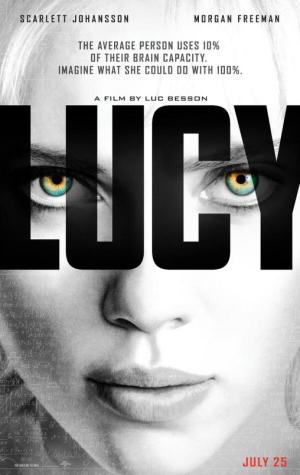 By Spencer. Most movies only use ten percent of their brain. Lucy is one of them.

It’s a dumb person’s idea of what a smart movie should be. I’m setting aside the fact that its most basic premise — we only use 10% of our brain — is a complete myth, because if I started worrying about stuff like that, I’d never be able to go to movies anymore. No, the stupidity of Lucy isn’t just in the science (though there’s plenty of that too) but in the nonsensical plot, the amateurish editing, and the way it interjects shallow armchair philosophy at every turn, like a college freshman on pot trying to impress everyone with how much he learned in his “Intro to Nietzsche” course. That such a moronically executed script happens to be a story about higher intelligence is the final irony, and if director Luc Besson (The Fifth Element, The Professional) were trying to make this film as some kind of a piece of satire on that point, it might have at least been worth the trouble. Sadly, he’s dead serious.  END_OF_DOCUMENT_TOKEN_TO_BE_REPLACED