By Spencer Davis. Yeah, so um, it’s been a while, huh? While you might have noticed Shadows & Noise has been on hiatus for the past couple of years, it’s Halloween weekend and I just couldn’t resist revisiting one of my favorite series we’ve ever done on the site. For me, October is the time to lock yourself in the basement, turn out the lights, and scare the everloving shit out of yourself—preferably with a movie, but hey, you do you. If you’re tired of all the usual options like The Shining or The Exorcist, I’ve got a few more off-the-beaten-path horror options for you to consider. And because real life in 2020 is scary enough already, I’ve also tossed in a few lighter picks that will give you more laughs than nightmares. You can thank me with candy. END_OF_DOCUMENT_TOKEN_TO_BE_REPLACED 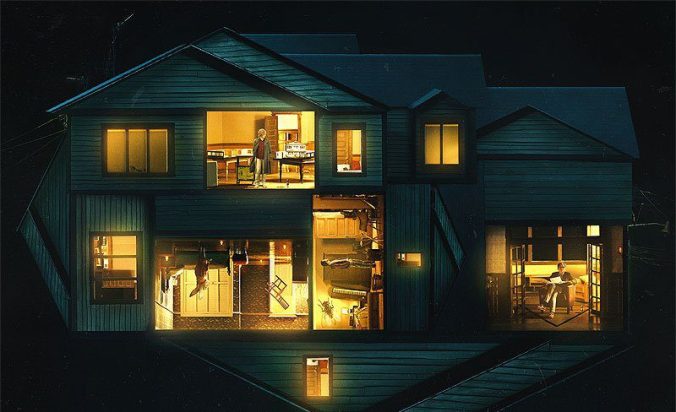 By Spencer Davis. Every year, I give you a new batch of overlooked Halloween movies to get you through the night—or if I’ve done my job properly, keep you awake through it—and this year, we go in some new directions. Some might say the world we live in right now is scary enough! And yet it’s perhaps no coincidence that the past two years have brought horror into a new era of acclaim, with hits like Get Out and A Quiet Place being named as serious awards contenders. Even the remake business is being taken a lot more seriously, with bold new visions of Halloween and Suspiria taking over the theaters and proving themselves to be more than cheap cash grabs. But if, like me, you think the best place to seek out your scares is in the darkness of your own living room, then enjoy these under-the-radar film frights. END_OF_DOCUMENT_TOKEN_TO_BE_REPLACED

By Spencer Davis. This is always one of my favorite columns to write every year, because October horror movies are like the gateway to fall for me. It starts getting dark a little earlier each night, and with Halloween around the corner, there’s no more perfect way to enjoy that darkness than with a good scare. And sure, in a year where horror movies like Get Out and It are dominating the box office—and even earning Oscar buzz—there’s no shortage of great options out there. But once you’re done with all of the more obvious choices, take a dive into the deep cuts with these underrated and sometimes forgotten screen terrors. END_OF_DOCUMENT_TOKEN_TO_BE_REPLACED

By Spencer Davis. One of the appeals of exploring foreign cinema is seeing how filmmakers from other countries are free to entertain story ideas that would never get the green light in Hollywood. It’s not necessarily that foreign directors are given more leeway to take risks; it’s that a plot device that seems absurd to us may, in the eyes of another culture, make total sense. With that in mind, let’s look at five more pictures from around the globe that redefine the boundaries of what movies can do. END_OF_DOCUMENT_TOKEN_TO_BE_REPLACED

By Spencer Davis. Yes, there will be subtitles. That’s the first hurdle you need to overcome when opening your mind to foreign film. But trust me, it’s worth it. You see, when you’ve only watched Hollywood movies, you unknowingly—through sheer repetition—become conditioned to believe that movies have to look and sound and feel a certain way. But popular art is influenced in all these subtle little ways by the culture that produces it. And just as there are distinctive stylistic differences between, say, American and British literature, or Italian and German opera, or even Japanese and Chinese food, the movie repertoire of a particular country takes on its own unique essence, flavored by the language and the history and the cultural values of the people who made it. That’s the magic of exploring foreign film: discovering how something so familiar as the American movie experience can, in new hands, become fresh and provocative and unexpected. END_OF_DOCUMENT_TOKEN_TO_BE_REPLACED

By Spencer. If you hate costume parties as much as I do, then you’re probably in need of a few quality scary movies to watch on Halloween night after the trick-or-treaters are gone. Last year, I gave you a few of my favorite lesser known options, from It Follows to Suspiria to The House Of The Devil to A Girl Walks Home Alone At Night. And if you haven’t watched all of those yet, you’re making a grave mistake. But if you’re looking for even more horror flicks that don’t suck, then fear not, because I’ve dug up a few more—headlined by Sundance 2016’s haunting indie horror breakthrough, The Witch. END_OF_DOCUMENT_TOKEN_TO_BE_REPLACED

By Spencer. I grew up in Texas, so maybe the constant presence of cowboy culture is to blame—but I grew up absolutely hating westerns. Or perhaps timing was a factor. The 80s might have been the lowest decade for westerns; due to the lingering impression that westerns were kid fare, a hokey bygone of those carefree 50s and before, not a lot of westerns were made anymore. They were a dead genre, and I liked it that way.

In the early 90s, that started to change. First Dances With Wolves and then Unforgiven won the Oscar, reviving interest in a more modern, more realistic take on the time period. And since then, we’ve seen a number of great westerns that have embraced grittiness and given more honest portrayals of the good, the bad, and the ugly of the period—acknowledging the racial tensions, for example, and de-romanticizing the outlaw violence and vigilante justice that pervaded. The result is a fundamental divide between old and new—between those who still prefer their heroes in white hats and their villains in black ones, and those who want to see reality on the screen.

Whichever style of western you prefer, this list has a little of both, and it’s your starting point for a tour of all the ways in which this genre has achieved movie greatness over the decades. END_OF_DOCUMENT_TOKEN_TO_BE_REPLACED

By Spencer. I don’t do costume parties. When Halloween comes around, the only acceptable form of celebration for me is to dim the lights, raid the bowl full of candy I bought for the trick-or-treaters, and watch a classic horror film or two. I say “classic” because, right now, mainstream horror flicks are in the biggest rut we’ve ever seen. In the past fifteen years or so—really ever since Wes Craven brought the genre back from the dead with Scream—horror movies have devolved into a pastiche of terrible cliches. From the torture porn of Saw to the shaky cam “found footage” pictures that come out seemingly every week, it doesn’t feel like Hollywood is trying anymore. Horror is there just to make a quick buck, with films done fast and cheap and according to a formula that guarantees several dozen jump-from-your-seat moments and not a second of genuine fear.

So this Halloween, forget the theaters. The best horror movies are the ones playing at home: The Exorcist, The Shining, Halloween, Night Of The Living Dead, Carrie, even the original black-and-white Frankenstein. You don’t need me to tell you about those. Instead, I’ll give you some less conventional picks you can stream from the darkness—and safety—of your own couch. END_OF_DOCUMENT_TOKEN_TO_BE_REPLACED

By Spencer. This is a website that celebrates both movies and music, so you know an article like this was inevitable. In revisiting our ongoing Movies That Don’t Suck series, it seems like the perfect time to look at the movie musical—the bane of the true music fan’s existence. Maybe our generation has such trouble accepting the musical because we were the first to be raised with movies that actually aspired toward realism—and there’s nothing realistic about spontaneously breaking out into song. But for the first half-century of filmmaking, the musical was Hollywood’s go-to crowdpleaser. And you don’t have to look beyond Bollywood to see that, even today, other cultures don’t share the modern American disdain for this genre. END_OF_DOCUMENT_TOKEN_TO_BE_REPLACED

By Spencer. If you’re anything like my friends, you saw 2011’s The Artist—the first silent movie to win the Best Picture Oscar since 1927—and were unimpressed. Obviously, a huge part of its win was the novelty and bravery of making a silent movie in modern times. But while critics raved, audiences yawned (if they went at all).

Even some classic film buffs have a hard time getting enthusiastic about the silent era. Yes, the pacing is much slower than we’re accustomed; the lack of dialogue requires overacting that comes off as unrealistic at best and shamelessly hokey at worst; and dammit, does there have to be so much reading? But if you’re willing to approach them with the right attitude, there are a handful of movies from the silent era that can actually be—gasp!—fun. You can’t just view these as movies; they’re pieces of living history. And best of all, since most of them are in the public domain by now, you can usually watch them for free in their entirety online! So if you’re feeling open-minded and you’re looking for a place to start, here’s your guide to silent movies that don’t suck. END_OF_DOCUMENT_TOKEN_TO_BE_REPLACED