By Spencer. How do you top an album as big as Siamese Dream? By going bigger. Now most rock stars would have just stopped there, but with Billy Corgan, nothing can ever be so simple. He had to make an album so big that nobody could ever top it. What else could explain a double album so overflowing, so all-over-the-map, and so ludicrously named as Mellon Collie And The Infinite Sadness?

In the fall of 1995, the Smashing Pumpkins reached a crucial turning point from which they could never go back. No, I’m not just talking about Billy shaving his head. Or the unnecessary “the” they added to the front of their name. (Though I’m sure we all slept easier knowing, finally and definitively, that “Smashing” was an adjective and not a gerund). The turning point achieved on Mellon Collie was the completion of Billy Corgan’s lifelong mission to become the biggest rock star in the world. And he did it by simultaneously embracing every caricature of rock stardom – and, whether intentionally or not, every caricature of himself – that he could cram into 28 songs.

I know I sound like I’m mocking it. Let me assure you that’s not the case. Mellon Collie was more than an album; it was a life experience. It changed the way a whole generation of teenagers thought about music-making and music-listening. Those first two hours I spent digesting it, during the fall of my junior year of high school, were only the prelude to the next twenty years I’d spend digesting it. I’m still not done yet. Fully absorbing an album this ambitious and this intricate is a lifelong pursuit. Like reading Ulysses, if Ulysses could rock your balls off.

(Quick personal interlude: As readers of Volume 1 know, my obsession with Smashing Pumpkins in high school was approaching a clinical level. But the week Mellon Collie came out, I got myself suspended from school for the one and only time in my life, over an incident I won’t recount in full here except to say it involved a gold-plated telephone from a hotel lobby, a napkin dispenser from the Hard Rock Café, and some unfortunate decisions. At any rate, I was grounded for two weeks, and specifically forbidden from acquiring Mellon Collie until my punishment was over. Needless to say, nothing short of a zombie apocalypse was going to keep me from getting my hands on a brand new Smashing Pumpkins double album on release day, and I feel safe now in confessing, after all these years, that victory was mine.)

Now Siamese Dream was an ambitious album by any measure, but Mellon Collie was operating on a whole other level. It was the sound of a band fully and unapologetically embracing the philosophy of “more is more.” The louds are louder. The quiets are quieter. The genres range from piano ballad to death metal to new wave to symphonic overture to acoustic heartbreaker to psychedelia to power pop. The tracklist includes titles like “Porcelina Of The Vast Oceans,” “Tales Of A Scorched Earth,” “Cupid De Locke,” and um, “Fuck You (An Ode To No One).” Listening to it in one sitting is like taking a two-hour crash course on the complete gamut of human emotions. In the distant future, when our robot masters have completely wiped out mankind and are curious what it was once like to feel, all they’ll need is a copy of Mellon Collie, a CD player, and a shitload of patience.

Indeed, it was around this time that the inevitable Smashing Pumpkins backlash began, and it came primarily from people who were tired of Billy Corgan’s unrelenting need to subject us to each and every drop of emotional turmoil he could squeeze from his needy, needy soul. Go back and listen to Corgan’s output from 1995 to 1997, and the only logical conclusion you can reach is that the genre of music we later came to call “emo” was grossly mislabeled. 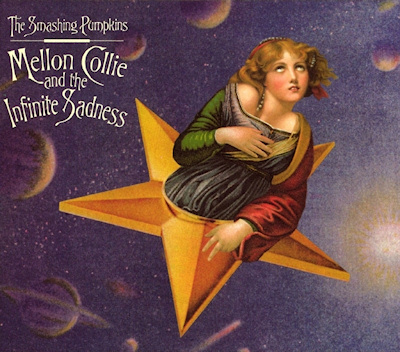 If the title alone didn’t make this clear, Mellon Collie And The Infinite Sadness is music for people who feel too much. And for that reason, there is a huge number of people who will dismiss it as sentimental drivel. For the rest of us, though, it’s precisely why we love it.

Music, perhaps more than any other art form, can translate mood into tangible form. And while so many casual pop fans treat music only as a vehicle for fun, as something they can dance to at the club or blast from their car stereos, music can do so much more. When you’re despondent, a perfectly sad song can heal you – as “Stumbleine,” “To Forgive,” or “In The Arms Of Sleep” have done for me countless times before. When you’re feeling exhilarated, the right song can put your joy into overdrive — see “Muzzle,” “1979,” “Jellybelly,” or “Tonight, Tonight.” When you’re angry to the point of seething, music is a release valve – “Zero,” “Bodies,” “Bullet With Butterfly Wings,” or “XYU” are perfect examples. And when you’re desperately in love, well, that’s what songs like “Beautiful,” “Thru The Eyes Of Ruby,” or “By Starlight” are for.

Which is all a long way of saying that Mellon Collie, more than perhaps any other rock album recorded, is a compendium of each and every mood that music can capture. That is its true greatness. Sure, the lyrics veer too often into sappiness, and the kooky experimentalism of a few tracks makes you jump for the skip button. But when you’re as prolific as Billy Corgan, you can afford to have a few failures. The successes will surely eclipse them.

That brings me back to the subject of success, and the aforementioned turning point in the Smashing Pumpkins’ career arc that Mellon Collie represents. As big a fan as I was, I never thought, even upon my first listen to Mellon Collie, that the Smashing Pumpkins would become the biggest band in the world. I mean, how many bands can claim to have held that title for even a short time? The Beatles, The Rolling Stones, Led Zeppelin, The Eagles, Michael Jackson, U2, Nirvana, Pearl Jam, the Smashing Pumpkins, Radiohead, Coldplay, the White Stripes … I’m sure I’m forgetting a few, but you get the picture. Look at each of them, and look what followed that level of success. The Beatles, The Eagles, and the White Stripes broke up. Michael Jackson lost his mind. John Bonham and Kurt Cobain literally died from it. As Thom Yorke once said, “Gravity always wins.”

The Smashing Pumpkins were no exception, and their time at the top was even more short-lived than most. During the Mellon Collie tour, a heroin overdose led to the death of touring keyboardist Jonathan Melvoin and the firing (for a time) of drummer Jimmy Chamberlain. The band carried on with replacements, but the damage was not undone so easily. Corgan became erratic and ill-tempered, and it bled into his live shows. The other band members could barely stand each others’ presence.

Meanwhile, from a songwriting perspective, the difficulty for Corgan after an album so sonically diverse and expansive was choosing a direction in which to go next. Reportedly, he considered following with an all-acoustic album. In retrospect, I wish he had done this. A return to the intimate might have re-grounded Corgan’s ego and provided some much needed stability after several years of songwriting schizophrenia.

But the chart-topping success of “1979” as a single, with its subtle doses of drum loops and electronic sounds, called Corgan in another direction. What do you do when you’re rock’s biggest band, you just lost your drummer, and you’re bored with the limits of guitars? You abandon rock.

[Editor’s Note: This piece originally ran as part of a series on After The Radio (http://aftertheradio.wordpress.com). Since I never got to complete the series there, we’re re-running Vol. 1 & 2 here on S&N in preparation for Vol. 3 and 4 — coming soon!]