By Spencer. The tickets sold out in ten seconds. I’ll say that again. Ten fucking seconds. Those kind of expectations are damn near impossible to meet. And Ryan Adams didn’t bother trying. For the official release party and the kickoff to his fall tour, he came to the 9:30 Club in Washington, DC—long considered one of the nation’s top venues—and acted like he was playing a frat party in his best friend’s driveway. The music was loose and the banter with the crowd was even looser, spanning topics from The Amityville Horror 2 to mushrooms to an imaginary cover band called the Dingo Infestation. (Trust me, some of this actually made sense in context).

Clad in a vintage Batman t-shirt and a denim jacket with the Terminator’s grinning skull plastered across the back, Ryan Adams was there to geek out, have fun, and promote the new record—in that order. And when midnight finally came, dawning the official release date of his first album in three years, well, he seemed genuinely excited about it. Not in the way Pearl Jam claims to be excited during radio interviews when they say they really do think their new album is the best one they’ve ever recorded (yeah, right), but in the way a wannabe teenage rock star is excited to have someone, anyone, hear this thing they just made, because how fucking cool is that?

Given the occasion, you’d expect the setlist to be heavy on tracks from Ryan Adams. And it was, opening with a slow-rocking rendition of the lead single, “Gimme Something Good,” and plowing through seven other new tracks on the night (not counting the surprise inclusion of “When The Summer Ends” from his other new album this month, 1984). But of course, you have to make room for the classics too. And when your “official” releases alone comprise 182 songs and counting, how do you possibly put together a set list that can do justice to all that?

The short answer is, you don’t. In fact, Adams didn’t include a single song from Heartbreaker, Gold, Demolition, Rock N Roll, or Love Is Hell—his first five solo albums, and the sources for some of his most well-known material. Instead, he drew randomly from his post-2005 discography, surprising us with multiple tracks from the country albums, Jacksonville City Nights and Cold Roses, and including a few favorites from 2011’s folkish Ashes & Fire.

This was my first time seeing Ryan Adams live, so I was surprised to hear such an improvisational bent to his stage show. “Easy Plateau” started out faithful to the album but expanded its coda into a jazzy jam session drenched in reverb and crisp drum shuffles. “Peaceful Valley” wasn’t remotely like the country ballad I know; it was warm and psychedelic, like a Grateful Dead tour bus broken down on the back roads of Tennessee. The mid-tempo ballad “Do I Wait” ventured nearly into grunge rock territory by the end. And “I Just Might” from the new album came with a heavier dose of keyboard and a rocking pace. 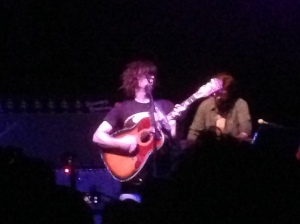 The show was far from workmanlike. At times, the band spent long minutes discussing among each other how they wanted to tackle the next song, and the night’s closer, an acid-tripping version of “Cold Roses,” collapsed after three bars, demanding a do-over. None of that mattered, because Adams was endearingly hilarious about it all, joshing his band for their fuck-ups and engaging the crowd like old friends. In a time when rock concerts all too often feel like an extended commercial, that kind of spontaneity is too rare a commodity. You have to enjoy it while you can. On the first night of a long tour, Ryan Adams seemed to get that, and this alone was worth the ticket price.