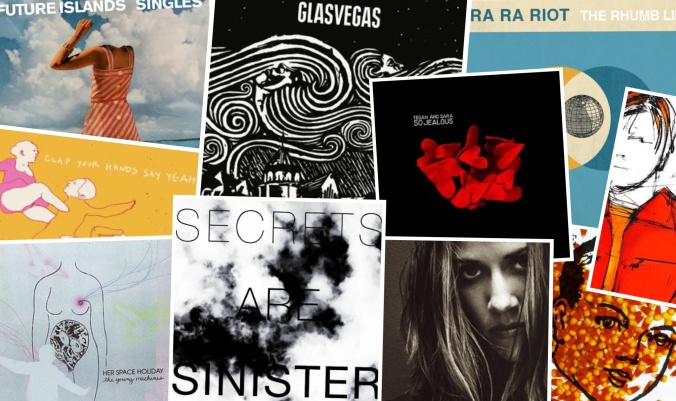 By Antony. The “Binge and Purge” series over at AV Club inspired these Singles Club mixes. Josh Modell, a music writer for the site, has amassed a 2,000-CD collection. He’s decided in 2016 that’s too many. His assessment of the records he’s keeping and those he’s tossing is sentimental and humorous, revealing something about how we age with our musical tastes. I passed it around to a few of the S&N writers, and from that sprung the Singles Club challenge:

Compile a playlist of songs from artists or albums that you, once upon a time, had some affection for, but which you now can reduce to a single song without ever missing the rest.

The challenge turned out to be surprisingly difficult because, once I started asking these questions, I found there were albums that I could entirely do without and there were others protected by an overly active sentimentality. It’s a rare album that has survived this long in my collection on the strength of only one song.

Here’s my entry to the Singles Club. Perhaps, a few of these tracks would make it on yours:

2. Abandoned Pools, “Mercy Kiss” (from Humanistic): In Los Angeles, I distributed promotional material—CDs, posters, etc—for Filter, which later became a magazine. I would get CDs, great and not-so-great, early and free. I absolutely thought Abandoned Pools was going to be alt-rock-radio huge. I was wrong. “Mercy Kiss” was a modest hit (as was “The Remedy” I think) and that was that. Humanistic has not aged well for me, but the riff of “Mercy Kiss” still gives me a kick when I hear it.

3. Glasvegas, “Geraldine” (from Glasvegas): I love Scottish bands. I also want to believe in the next big British band. (Innumerable casualties of British press over-hype litter my music library). “Geraldine” is just a monster song. It’s got witty lyrics and the guitar line is infectious. That said, the rest of the album (and the band’s output) never quite reaches that level. I have no time for Glasvegas though I always have time for “Geraldine.”

4. Sponge, “Molly” (from Rotting Piñata): This was an alt-rock radio hit when I was delivering pizza for Pizza Hut. I rushed out and bought the CD on the strength of “Plowed” (still a beast). The old gamble of buying-a-CD-for-one-song did not pay off this time. I listened to the record a lot driving around town; I seventeen-dollars-wanted to like it. I started skipping more and more tracks until I was only flipping between “Plowed” and “Molly.” There’s something perfect about this song and I don’t quite know what it is. On listening now, I think I hear a more melodic Eddie Vedder, no?

5. The Thrills, “Old Friends, New Lovers” (from So Much For The City): I enjoy following rabbit trails on iTunes. One trail in the early days of iTunes took me to The Thrills. I dug the 30-second samples and downloaded it. I may have been a few deep or it was in the feels-clear-but-isn’t hours after midnight. They were a bit different than my usual thing. A little more granola. I thought it was pretty great. After a few weeks, I thought they were pretty good for what they are. Now I think they’re clearly not my jam. However, “Old Friends, New Lovers” manages to remain unscathed by the judgment of time, and it keeps alive that brief moment when I could have become a VW-bus-driving, outdoorsy hippie.

6. Sheryl Crow, “If It Makes You Happy” (from Sheryl Crow): How honest should I be? This song makes me think Sheryl Crow is sexy. That’s the point of it, right? Listening again, this song is even better than I remember it being. Nice country flourish in the guitar. And I admit it’s unfair to suggest that one could do without the rest of Sheryl Crow because the other singles—“A Change Would Do You Good” and “Everyday Is A Winding Road”—still stand tall. But this is a subjective thing, and this song does everything I want a Sheryl Crow song to do, so it’s the only one I need.

7. Future Islands, “Seasons (Waiting On You)” (from Singles): This is the most recent song on here. On the strength of this song, I forced myself to love the record. I told others about it with enthusiasm (perhaps you were among them), and then two weeks into this affair, I realized that I wasn’t in love at all. I blame “Seasons” for this. There’s a swell in the music that seduces you, makes you want to be in love. But really I loved that one song and the other songs are fine, and I’m sure they make somebody happy. That somebody just isn’t me.

8. Tegan And Sara, “Walking With A Ghost” (from So Jealous): Another early iTunes find for me. I liked So Jealous a lot, but it eventually fell out of rotation. Then a strange thing happened, Tegan And Sara got bigger and bigger and by most accounts better and better. Maybe that’s true, but I’ve never felt their later stuff though I like that others dig them. So it’s just me and “Walking With A Ghost.”

9. Longwave, “Sirens In The Deep Sea” (from Secrets Are Sinister): If you want me to get very excited about a band, have them sound like the Smashing Pumpkins. I’ll buy the record, rock to it in my car (reasonably), and be whisked away to a wonderful dream-like place. Unfortunately, I always come down. Longwave are not the Smashing Pumpkins. They hold their own for the 4 minutes of this song though. I’ll save this and Silversun Pickups’ “Lazy Eye” as the two great non-Pumpkin Pumpkin tracks.

10. Her Space Holiday, “Sleepy California” (from The Young Machines): I tried to like this band and all the other ones that fit in this sliver of the indie rock world—Album Leaf, Adem, etc.—but none of them ever stick. Each has a couple of songs that nail their particular version of inward-turned, bedroom pop, and that’s plenty. On its merits, I think “Sleepy California” is a deeply moving song, and I really felt that stronger than ever before as I put this mix together.

11. Ra Ra Riot, “Can You Tell” (from The Rhumb Line): There’s a lot of indie rock from the late 00s that sounds similar to Ra Ra Riot. They have a cellist, which is different. Anyway, I kept hoping the band would get more dynamic, but their decently solid debut, The Rhumb Line, was really their peak. Listening now, it’s still good though a bit dated. I can contain all my appreciation for the band in “Can You Tell.”

12. Clap Your Hands Say Yeah, “Skin Of My Yellow Country Teeth” (from Clap Your Hands Say Yeah!): This might be the first internet-indebted hit. An outstanding Pitchfork review made CYSY the indie band of the moment. I listened to it a lot, probably more at friends’ houses than at my own. As the moment passed, I quickly reduced the album to three tracks, and now eleven years later, this one song can easily stand for the whole.

13. Devendra Banhart, “The Body Breaks” (from Rejoicing In The Hands): Banhart released two albums simultaneously, RITH and Nino Rojo, and I stumbled on them while surfing iTunes one night and was captivated. He’s a little odd—they call it “freak folk,” whatever that means—but charming. Banhart deserves credit for opening me up to modern folk, which is now the majority of what I listen to. But as happens to so many firsts, I ended up finding things I liked much better than Banhart. Now I couldn’t tell you when the last time I listened to any Banhart beside this one song.

14. The Concretes, “Seems Fine Shuffle” (from Layyourbattleaxedown): I wouldn’t call it false advertising exactly, but “Seems Fine Shuffle” was my introduction to The Concretes. I like the shambolic vibe and joy of the song. I listened to Lay… quite a bit before I learned it was their B-sides collection. Their proper albums didn’t really click with me. In the end, I forgot the album but not this song or the beautiful voice of Victoria Bergsman.

Or listen on Spotify: