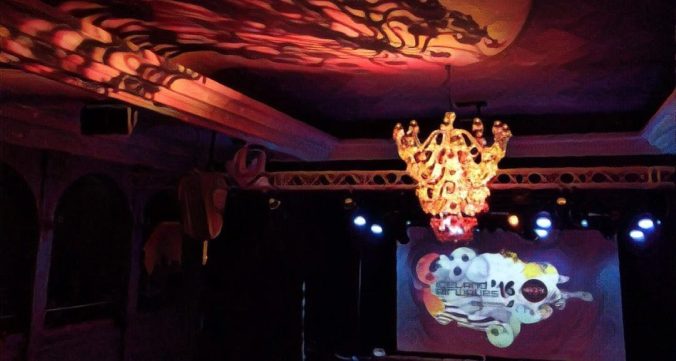 [Editor’s Note: Nicole Funari, who hosts the Movie That Matters podcast, was kind enough to let us post this latest mix from her Badges & Wristbands Records project, in which she visits the many under-the-radar music festivals out there and compiles a mix of the best unknown artists she discovers].

By Nicole Funari. I am a veteran of the multi-venue, multi-day music festival. Each time I attend, I get a sense of place along with an abundant supply of music. The first thing I learned about Reykjavik was that turning the left tap brings pure, cold, mineral-laden spring water, and turning the right tap brings naturally hot, slightly malodorous, geothermal water. It seems appropriate that this tiny island nation bent on being a humanist utopia should have free healthful water to drink and to heat it streets and houses. It has a similarly wide and deep social safety net so effective that Icelanders no longer have the concept of a broken home. Icelanders are proud of their Viking heritage despite being a peaceful, progressive people who believe in elves. Perhaps that’s why their music is both mellow and digital. Two things I hate.

Iceland Airwaves was unlike any other festival I attended in one critical way. I saw more female artists than I’ve ever seen at any festival anywhere. The playlist features some amazing female vocalists—notably from East Of My Youth (my favorite performers) and Lake Street Dive. But perhaps more importantly, I saw many female musicians who were band members, not band leaders. And while Iceland is so lacking in diversity that Icelanders have to be careful not to accidentally date a close relative, the festival organizers made sure people of color were well represented in the international acts like Conner Youngblood, Morning Bear, and Adia Victoria, all from the U.S. Music festivals do not need to be a white man’s game.

Ultimately, in a music festival full of electronic acts, I was disappointed in most of what I heard. Palate cleansers (as Carrie Brownstein used to call them on All Songs Considered) were few and far between. I was shocked to realize the throwback sixties band The Sonics were an actual sixties band reformed with one original member. The only punk I heard was high-pitched yelling (Tófa, if you’re so inclined). However, I was delighted to see Svavar Knútur twice at the festival after seeing him twice at NXNE. He’s the perfect folk performer—mixing funny and sad stories in with his funny and sad songs.

The Spotify list below represents the bands I enjoyed hearing and the songs I most liked from their sets. It’s not a complete list—I encourage you to check out “Thoughts” from RUgl and “Every Day I Wake” from The Living Arrows. Also, every good compilation needs a cover song so check out “I Want You Back” from Lake Street Dive.