By Jeremy. Full Disclosure: I am a nerd and am completely comfortable owning that label. Everyone should be a bit nerdy; it’s a necessary component for being a well-rounded person. There has always existed a stigma around being a nerd, but recently (meaning the last 3-4 years) it has become quite cool to be nerdy.

Television shows like Game Of Thrones and The Walking Dead have broken down the wall and now are fixtures in mainstream media. Historically, the genres of these shows, fantasy and zombies, have been regarded as nerdy. Now the masses have adopted them. The trend is even more prevalent in theatrical films; the popularity of The Lord Of The Rings and The Hobbit trilogies prove that fantasy stories have become cool. And there is a larger steam engine that is driving this movement — comic book movies. Comic books are dominating the box office and this trend is not going to stop any time soon. Christopher Nolan’s Dark Knight trilogy, The Avengers, and X-Men: Days Of Future Past have completely redefined what is popular at the box office. With Disney’s acquisition of Marvel Entertainment, it is expected that comic book movies will continue to dominate.

“The book was better than the movie.” This statement is common whenever a film attempts to recreate the same experience as the book. I remember reading comic books as a kid, but I only had the ability to read issues sporadically. My first exposure to comic book films was Tim Burton’s Batman and I had no frame of reference. I walked away from the film ignorant of the accuracy of the story. Does one really need to understand the original material in order to be entertained? With those questions still in mind, I’ve decided to conduct an experiment: I am submersing myself into reading nothing but comic books for the summer.

But where to begin? I’ve scoured the net for what are considered the “best” comic series and graphic novels. And I’ve set a few ground rules. To develop a fair assessment I will do the following:

When you ride roller coasters, do you start with the biggest, fastest coaster? Or do you start small and work your way up? I’m of the opinion that it’s best to start big and therefore set the bar. Ask most comic book enthusiasts for the “best” and they will respond with The Dark Knight Returns, by Frank Miller. So that’s where my summer comic book experiment will begin.

There are certain irrefutable truths.

For example, take #2. There are in fact only five Rocky movies in the series. (Rocky V simply does not count – for the sake of the series, it is banished). When examining the Rocky series, a definite arc is apparent:

What the Rocky series does — and that most comic book films neglect to do — is tell the story of the hero who is past his prime. There is a mass appeal to the amateur story and more importantly the hero in his prime. But audiences are simply not interested, it would appear, in stories where the superhero must face his own limitations (old age). Strange that the same rule doesn’t necessarily apply to athletes; fans ultimately gravitate towards athletes that are nearing their end of their career. Want some examples?

Success at, or past, one’s prime is possible but the odds are slim; but that’s where there is a compelling story.

A superhero past his prime: that’s the foundation for Frank Miller’s 1986 miniseries, The Dark Knight Returns. Considered to be part of the holy trinity of graphic novels (the others being Watchmen and The Sandman), The Dark Knight Returns directs its focus to an aging Bruce Wayne who has retired from his career as Batman. Before I delve into an analysis of Miller’s masterpiece, I believe it’s necessary to start with the wider Batman mythology.

Since Bob Kane created Batman in 1939, an entire mythology has evolved — not just for the character, but also for Gotham and all who reside within its mythological walls. At its core, the Batman story is dark in nature. A boy falls into a well that happens to be a cave. The cave is filled with bats and the flying rodents swarm the young boy. Later in the story he witnesses a hoodlum gun down his parents. It is the combination of these events that prompts him to assume the identity of Batman. While the elements of this story have seen numerous revisions since the inception of the character, an apparent darkness remains.

So where does The Dark Knight Returns fall on the timeline of Batman stories? To determine this, one must look at some of the various representations of the character.

Bob Kane’s original Batman fell on the darker side of comics for the time period. Given the “pulp” nature of those comics, Batman embodied a character that showed little restraint when dealing with criminals. It was not uncommon for him to kill or severely maim if necessary.

Nearly ten years later Batman was reproduced in movie serials, and later in the 1960s Adam West television series. Despite the dark nature established by Kane’s creation, these incarnations initiated the transition to a comical (clownish) representation. The 1960s Batman served its purpose and is well known; however, the essence of the Batman origin, on screen and in the comics, was abandoned.

In an effort to return to Batman’s roots, director Tim Burton revived Kane’s darker vision for his 1989 movie version. Burton ultimately embraced Batman’s tragic roots and weaved it into the film. But while the darkness remained, the movie still integrated some comic elements (Jack Nicholson’s portrayal of the Joker) to preserve a light-hearted appearance. Like Rocky V, 1995 through 1997 are completely lost. The producer who allowed Joel Schumacher to take the lead on Batman Forever and Batman & Robin should be banned from filmmaking. Both of these films are recreations of the television series, but without Adam West. Luckily, eight years later, Christopher Nolan would revive Batman. Without going into detail, Nolan correctly interpreted the story. His trilogy minimized the comic book element and placed the mythology in the “real” world. The films are dark and correctly convey the torment felt by the character. Nolan got it spot on.

Alright, done with the history. So where does Frank Miller’s story fit into this timeline (not chronologically, but rather thematically)? The Dark Knight Returns possesses both the dark nature of Nolan’s Batman and an element of absurdity. What is interesting is that the absurdity works.

Batman is retired and 55 years old. Gotham has gone to hell and is overrun with crime and corruption. A gang referred to as the Mutants have assumed control of Gotham — or are attempting to. The Mutants’ visors are a cross between Geordi from Star Trek: The Next Generation and a Cylon (not Tricia Helfer – the sexy blonde) from Battlestar Galactica and they have dentures made of shark teeth. Needless to say, Bruce is restless. Like Brett Favre, who simply could not walk away, Bruce opts to suit up once again.

What follows is the Cliff’s Notes version:

There are elements of this story that might seem absurd but are warranted. For example, Batman wields guns (hell, at one point he uses a sniper rifle), or rides a horse later in the series. These seem ridiculous but work within the confines of the story. Bruce has aged and the stealth element is now difficult. His tools/toys become primitive. If he wants to play the game he must lower his standards when necessary. What is compelling is the intense desire that Bruce possess. It is the desire to embody what he once was. 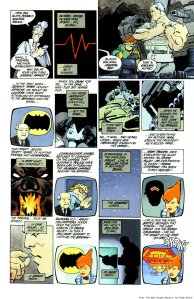 Miller’s presentation is unique and his use of the television talk show advances the story. There were times where I found this format to be distracting and I hoped that the next page would adhere to a standard comic book format. The artwork embodies Miller’s personal style and is present thorough the entire series.

Given that there was the opportunity to develop an entirely new villain, I was let down by the Mutant characters. Overall I enjoyed the story and initially longed for the classic villains instead of the Mutants, but I had to remember that the core of the story focuses on a retired Bruce Wayne. The introduction of Harvey Dent seemed unnecessary and fleeting. His role in the story gave the appearance that it was an afterthought. 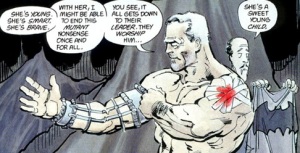 The characterization of Batman/Bruce Wayne was spot on. To witness a superhero past his prime was compelling and further supported a belief that Batman is the best of the best. Since Bruce is a real person the reader has the opportunity to age with him. He is not frozen in time. He is not invincible. He cannot fly. He has no super power. He is simply a man with lots of money, toys, and an unresolved past.

So should The Dark Knight Returns be part of the holy trinity of comic books? From my current knowledge, I can see it in the top five. It is hard when my knowledge of comic books is limited. What I can determine is that it is unique and holds a special place among the best.

*[Author’s Note: Since reading The Dark Knight Returns, I was informed that there is a modern cartoon based upon this comic. I have earmarked it and plan on viewing it soon.]

7 thoughts on “The Projects: The Amateur Comic, Vol. 1 – The Dark Knight Returns”