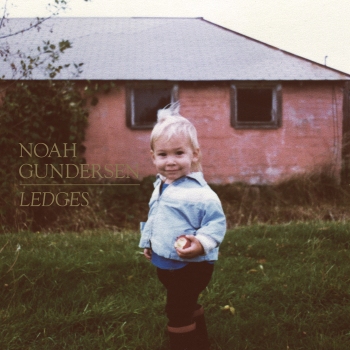 By Spencer. As a music blogger, there’s no better time of year than now. Ranking the year’s best releases isn’t just an exercise in appreciating greatness; it’s food for argument. So expect plenty of that as our S&N contributors use the next few weeks to rank their favorite music of 2014. The comments section will no doubt be heated!

If you read my 2013 list over at After The Radio, you know I was less than impressed with last year’s output. My principal complaint? In a year of many good albums, there were no great ones. I’m happy to report that 2014 did not follow that trend. My top five albums this year were each perfect from start to finish.

I’ve already sung the praises of Noah Gundersen‘s breakthrough, Ledges. After a year of listening to this album, my opinion of it hasn’t dimmed in the least. It’s songwriting perfection in an age where actual songs typically take a backseat to vibe. From the opening a capella bars of “Poor Man’s Son” to the driving roots rock of “Boathouse” to the bitter sadness of “Last Defeat,” every song is steeped in soul. What you hear is the sound of a desperate young songwriter leaving it all on the table—just in case this is the last music he’ll ever get to release. Listening to the result, I doubt that will be the case.

I never understood the appeal of St. Vincent before. But between this year’s amazing self-titled release and her live show at the 9:30 Club in February, consider me a convert. How do you categorize music so sprawling as this? Is it rock? Pop? Metal? Funk? The correct answer is, all of the above. But while it lacks none of the trademark weirdness of Annie Clark’s earlier work, St. Vincent supplements all that with hooks and melodies that make it instantly accessible. It’s a huge step forward.

At the risk of turning S&N into a Ryan Adams fansite, it should be no surprise that his self-titled slice of rock heaven comes in at #3. These songs just don’t get old for me. Adams does nothing here that I would say is artistically adventurous—but dammit, it’s just too much fun to care. The Ryan Adams discography dwarfs everyone not named Dylan or Corgan at this point, but if anyone ever asks me to recommend just one Ryan Adams album as an introduction … well, I’d still go with Heartbreaker or Gold. But this one’s very much in the conversation. And to achieve something like that thirteen albums into your career is a rare accomplishment.

Sturgill Simpson might have released the year’s oddest album. The cover art gives you the impression that this is all some ironic hipster joke. But underneath that is a reawakening of authentic country & western music that would make Waylon Jennings proud. Full of attitude and esotericism, give this one a listen if you’ve been craving a meaningful alternative to that Nashville crap that passes for “country” these days.

As a session guitarist, Blake Mills has collaborated with the likes of Jenny Lewis, Band Of Horses, Norah Jones, Lana Del Rey, Julian Casablancas, Lucinda Williams, and the Avett Brothers. But his second LP, Heigh Ho, should establish him as a star on equal footing with some of those names. Intimate, unconventional, and just damn beautiful, Mills steps out of the background and into the spotlight in a big way with this stunning record.

Rounding out the rest of the list, Glass Animals might have single-handedly created the genre of nighttime jungle pop (if that makes any sense) on their debut album, ZABA. U2‘s Songs Of Innocence, once you get past the marketing gimmick, was their finest work in over a decade. (Sure, it was a little ridiculous for Rolling Stone to rank them #1 this year, but don’t penalize U2 for that). Coldplay returned to form with Ghost Stories, an album that almost makes amends for the horribleness of Mylo Xyloto—almost.

Longtime favorite Angus & Julia Stone took a more pop-oriented approach with their latest, but the album’s second half is enjoyably dark and quirky. Lana Del Rey‘s sophomore effort, while it retreads tired ground at times, has enough flashes of greatness in its first half to suggest a thoughtful future for an artist who should have been a flash-in-the-pan fad.

Elbow just might be the most underappreciated band in Brit rock, but The Take Off And Landing Of Everything continues their streak of quality. Mirah, another long unappreciated gem, sounds like an edgier version of Feist, and Changing Light gave us another dependable batch of her deceptively complex songwriting. Caribou continues to make electronic music that out-thinks and out-emotes the work of the genre’s lazier contemporaries.

Winterpills have been quietly flying under the radar for close to a decade now, but this year’s Echolalia makes you question why; the songs are flecked with touches of The Byrds, Simon & Garfunkel, and Elliott Smith, but with a modern flair. And Sharon Van Etten, whose previous work was a bit too dull to justify the hype, woke me right back up with this year’s Are We There, blending searing lyrics with a more compelling attention to production.

To hear some favorite tracks from these albums, download S&N Mix 9: Spencer’s Best Of 2014.