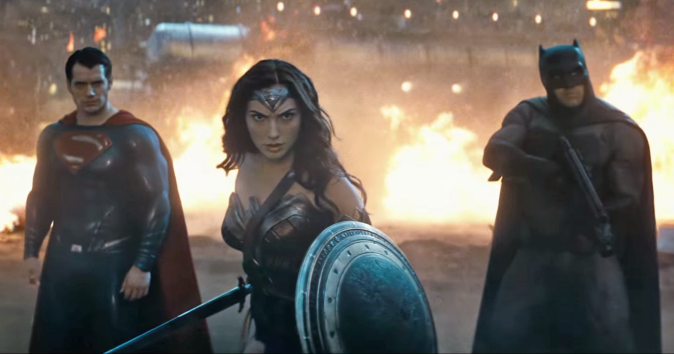 By Spencer. By now, many of you have already seen Batman v Superman: Dawn Of Justice—and been disappointed. I haven’t. Putting Superman and Batman together in a movie was an easy lift, and yet it’s been obvious from the very first trailer that director Zach Snyder completely and utterly blew it. And I just can’t keep rewarding this kind of mindlessly shitty filmmaking with my dollars. See, that’s what they count on. They think that all that matters is the brand. They think that if their marketing campaign can establish it as an “event movie,” that you will literally have to plop down your fifteen bucks to be a part of it. They think they don’t have to earn it anymore. And of course this phenomenon is strongest in the area of franchise movies—where the perception that they have a guaranteed fan base inevitably breeds laziness.

So whenever we talk amongst ourselves about bad movies, I think it’s crucial that we maintain a dichotomy—between the truly terrible, and another category that I’ll call the “interesting failures.”

Examples? Let’s start with these:

The Matrix Reloaded and The Matrix Revolutions (2003): It’s hard to think of two sequels that more completely failed to live up to the hype. But step back and think about why. The scripts were bogged down in a heavy-handed mysticism that tried way too hard to build upon the ideas of the first film—culminating in that incoherent mess of a scene in which The Architect mainsplains the nature of choice to Neo. In a moment when the fans were expecting the ultimate showdown between good and evil, the Wachowskis gave them a philosophy lecture. Which is to say that maybe they respected their audience too much. Sure, it was a completely unsatisfying climax. But if only Hollywood could learn to fail more like the Wachowskis and less like Michael Bay.

Interstellar (2014): Not all interesting failures are franchise movies. Christopher Nolan makes blockbusters for smart people, and from Memento to the Dark Knight trilogy to Inception, he’s never failed to deliver. Until Interstellar. With a stellar cast and a clear ambition to recapture the spirit of 2001: A Space Odyssey, it’s frustrating that this film comes so close to greatness and still falls so far short. The script can’t escape the black holes in its own logic, and the notion that love is a force of physics—delivered in that cringeworthy monologue by Anne Hathaway—felt ridiculously out of place in a film that went to great lengths to be scientifically-accurate. But it’s those efforts toward realism—Nolan consulted with astrophysicist Kip Thorne on the details—that make this such an interesting failure. From the first accurate depiction of a black hole on screen to the way that characters age at different rates due to the distortions of relativity, I can think of no film that gives its viewers greater credit for being able to take on lofty ideas.

Gangs Of New York (2002), The Aviator (2004), and Shutter Island (2010): Sometimes interesting failures are the result of great directors taking chances. And no director has more of them than Martin Scorsese; I could also highlight The Color Of Money, The Age Of Innocence, Cape Fear, The King Of Comedy, or The Last Temptation Of Christ as worthy examples. But instead I’m focusing on three films in the long-running collaboration between Scorsese and Leonardo DiCaprio. Gangs Of New York is a fairly ordinary revenge tale that is almost (but not quite) saved by its detailed obsession with historical accuracy. The Aviator drags once it sets into the story of Howard Hughes’s struggle with obsessive-compulsive disorder, but before that, it’s practically a visual textbook of early Hollywood, even going so far as to use period-appropriate Technicolor to capture the mood of the era. And Shutter Island falls apart under a script that can’t make sense of itself, but at least keeps you guessing the entire way about what’s real and what is delusion. Scorsese may be best known for his gritty mafia films, but his unmatched knowledge of film history and his willingness to experiment in different genres from romance to musical to comedy to historical epic make even his failures worth watching.

Spellbound (1945) and Rope (1948): Along similar lines, Alfred Hitchcock tried his hands at several fascinating experiments that didn’t quite work out. In Spellbound, a thriller in which a psychologist (Ingrid Bergman) tries to help an amnesia patient (Jimmy Stewart) who may have committed a murder, Hitchcock famously staged a dream sequence in collaboration with the surrealist artist, Salvador Dali. Sadly, the studio cut the sequence from twenty minutes down to just two, leaving fans to wonder what might have been. Three years later, Rope was an experiment of a different kind. Set entirely in a New York apartment, Hitchcock crafted this murder story to take place in real time and used 10-minute long takes (spliced together via some clever camera positioning) to make the film look like one single uncut shot. As an experiment, it’s ambitious, but the limitations make the film feel like a gimmick at times, and the plot suffers as a result. Still, there’s no disputing the artistic vision behind either film, and they’re fascinating to watch when you know the background.

Star Trek: The Motion Picture (1979): Moving back to franchise movies, you’ll find few defenders of this, the very first Star Trek film. Part of its negative reputation stems from just how much the action-packed follow-up, The Wrath Of Khan, overshadowed it. By comparison, the first Trek is long, slow-paced, even dull. The costumes and sets are drab, shedding all those vivid colors of the original TV series for a more muted and modern tone. And the plot, which once again pays homage to 2001: A Space Odyssey, lacks action of any kind. Yet it’s easily the most intellectual of the Star Trek movies, with a foe that challenges notions about the definition of alien life and a mystery that requires Kirk and Spock to use their brains instead of their phasers. And the visual effects are spectacular, sending the Enterprise on a fifteen minute sequence deep into the heart of a massive alien ship. It’s a film that requires patience but rewards it.

The Darjeeling Limited (2007): Wes Anderson is so hit-and-miss; for every Rushmore or Royal Tenenbaums or Moonrise Kingdom there’s a Life Aquatic or Grand Budapest Hotel that’s more style than substance. And then, somewhere in-between, there’s The Darjeeling Limited. It’s got all of Anderson’s trademark quirkiness, but it isn’t defined by it. And it has a serious spiritual streak that tries to talk about big things like family and emptiness and the search for meaning. At times during this train ride across India, it speaks eloquently of all these things—but the metaphors are also a little too “on the nose,” like a college student with a crush on J.D. Salinger. Which is why it will never quite stand alongside Anderson’s best work, as hard as it tries—indeed, because it tries so hard.

Under The Skin (2014): This is one of the weirdest movies I have ever seen—a film that leaves you feeling a little uneasy when it’s over, that sticks with you afterward, and only days later do you realize how much you liked it. The story of an alien in human form (Scarlett Johansson) prowling Scotland in search of male victims (for what though?), it’s a movie that relies heavily on visuals and metaphor. When she draws her prey into her trap, we see only black rooms and pools of dark liquid enveloping them; it’s not meant to be taken literally, and yet it is far more disturbing than showing what might really be happening to them. In the film’s second half, Johansson begins to struggle with the moral implications of her work, leading to some clever philosophizing about the nature of humanity. Why do I call it a failure? Many would argue it’s not. But the reason I include it here is because even those who don’t enjoy it—and I imagine that’s a lot of you—can’t deny that it’s a completely unique, completely memorable film.

Dick Tracy (1990): In the no-man’s-land between Tim Burton’s Batman and the modern comic book movie phenomenon you’ll find the historical curiosity of Warren Beatty’s Dick Tracy. Coming the summer after Batman, everyone thought this was the next great blockbuster, but it’s remembered largely as a commercial disappointment. That’s a shame, because Beatty’s direction is simply brilliant—using a vividly unrealistic color scheme, art deco style, and ridiculous makeup as if to create a living, breathing 1930s comic strip. Al Pacino’s overacting grates after a while, and some decry the cartoonish style of it all—but that was the whole point. No comic book film has ever looked like it, which is why I plant it firmly in the underrated category.

Interesting Failures will be back as part of a continuing series on S&N, so keep an eye out under the Projects page!

One thought on “The Projects: Interesting Failures”