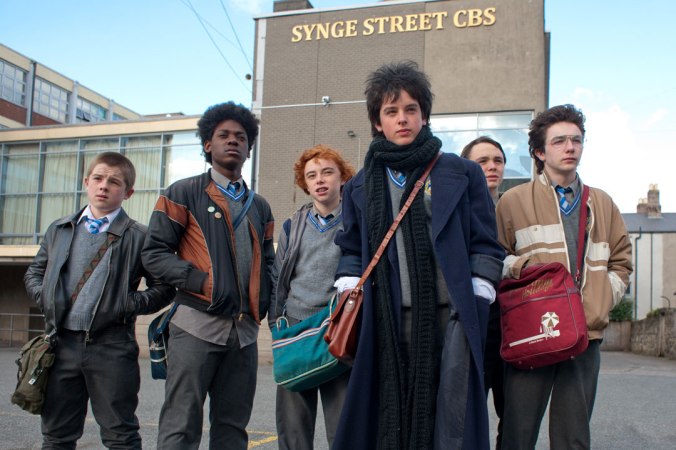 By Spencer Davis. Today in our continuing series on the most iconic uses of music in film, we look at two recent transformative illustrations of the music-writing process, along with a small piece of Hollywood history, a slice of brilliant visual comedy, a brief musical interlude in war, and a tribute to a recently-lost icon.

The Dance Rehearsal Music Video in Sing Street (2016): The moment I fell for Irish director Jay Carney’s love letter to 80s music, Sing Street, comes halfway through the movie with the Hall & Oates-esque song number for “Drive It Like You Stole It.” Carney’s always had a knack for showing on screen how an artist internally visualizes their music. And here, he does it by breaking from reality during a school dance rehearsal to build up, piece-by-piece, the music video of the young frontman’s fantasies—borrowing naturally from 80s pop culture moments like Back To The Future or Michael Jackson’s “Beat It.” But the real power of the scene comes as the video starts to incorporate all of the fantasies he has for his own personal life: the girl he loves walks through the door, his rigid Catholic schoolmaster finally loosens up, his parents are happily together again. All the people who are most important to him are there to support him, which of course, isn’t a fantasy that quite comes true. But like the movie itself, it’s a powerful expression of how music can be a vehicle for your dearest hopes and dreams.

Lauren Bacall Steals The Stage in To Have And Have Not (1994): When you watch this next scene, you’re seeing a lot more than you realize at first blush. You’re watching the very first moment when audiences were introduced to a screen legend, Lauren Bacall. A random pretty girl in the crowd trying to brush off the attention of an unwanted man, she joins Hoagy Carmichael at the piano for an impromptu duet of “Am I Blue?”—the very first words of her acting career coming in song, a low, breathy register that was tougher than any screen actress who came before her, but still beguiling and feminine. As Humphrey Bogart studies her from across the room, you’re also seeing the moment that the two film icons fell in love in real life; Bogart was married and Bacall was only nineteen, but during the filming of this movie, they became Hollywood’s most fabled star couple. And you’re watching the first and most famous of four on-screen pairings between the two stars; they’d go on to make The Big Sleep, Dark Passage, and Key Largo over the next few years, each a classic in its own right. That’s a lot of Hollywood history for one little song number.

The Recording Sessions For “Good Vibrations” in Love & Mercy (2015): As I said before with Jay Carney, it takes special skill to depict on film the thought process behind musicmaking. While Sing Street does it by peering into the artist’s fantasies, Bill Pohlad sticks strictly to reality in Love & Mercy during a montage that shows Brian Wilson, the mad genius behind the Beach Boys, tinkering feverishly in the studio to give life to the sounds in his head. The pulse of an organ; an off-kilter bass line and drum beat; a few out-of-tune horns; a vocal track; cellos whirling like a propeller; the ghostly whine of a theremin. The camera spins through all of this, capturing not just the relentless and patient perfectionism it took to record a song like “Good Vibrations” but also the gnawing boredom and frustration of the background players as the creative process drags on and on. No scene has so accurately portrayed the day-to-day experience of studio recording, for all of its maddening challenges.

The “Rock ‘N’ Roll Creation” Malfunction from This Is Spinal Tap (1984): It’s hard to pick a favorite music moment from a movie with so many of them. The band shaking their asses in skin-tight leather to “Big Bottom”? Or playing “Sex Farm” at an Air Force base social full of old-timers? What about the dancing leprechauns dwarfing an 18″ model of “Stonehenge”? Or maybe Nigel previewing that hauntingly beautiful piano line to “Lick My Love Pump”? All worthy options, but I’m going with bassist Harry Shearer getting stuck in a malfunctioning pod during a live performance of “Rock And Roll Creation.” As frantic stagehands try to break him out, first with a hammer then with a blowtorch then with bare fists, it’s paced perfectly with the song. (Unflappably, he even manages to play his bass solo from inside the pod)! And then that triumphant ending when he breaks free at the worst possible moment and pumps a fist to the crowd. It may be comedy, but it takes a touch of art to pull it off so well.

Listening To Edith Piaf Before The Battle in Saving Private Ryan (1998): From the other end of the spectrum, music provides a small comfort in a time of hell in the lead-up to the final battle sequence of Saving Private Ryan. Spielberg’s camera peeks around the ruins of a deserted French town while a lonely phonograph plays a sad, sad song. Edith Piaf’s “Tu Es Partout” is all about heartache and loss, as Tom Hanks and Jeremy Davies translate, but it’s also a chance for this band of soldiers to reconnect with a tiny piece of civilization. The way it echoes off the broken walls and empty streets makes the song sound small, highlighting the distance between life as they used to know it and the circumstances they find themselves in now. In a movie with so many guns and explosions, it’s this piece of music in this quiet instant that hits the hardest.

Marty Plays “Johnny B. Goode” in Back To The Future (1985): With last week’s death of rock pioneer Chuck Berry, it’s appropriate that we close with Michael J. Fox’s guitar-shredding rendition of “Johnny B. Goode” at the Enchantment Under The Sea dance. Take a moment to think about why the scene is so iconic. Marty’s in 1955, which means that “Johnny B. Goode” is only three years from being released. Yet to the ears of the kids at that dance, it sounds revolutionary. Guitars just didn’t do things like that in those days; they were strictly a rhythm instrument, designed to carry the groove but never to stand front and center. Of course Marty takes it too far in the end with an Eddie Van Halen solo that’s still a few decades too early for that crowd. But the fact that the movie was able to seamlessly pair a hair metal solo with a song from thirty years earlier only shows just how forward-looking Berry’s own guitar stylings were. In the movie universe, we all know that Chuck Berry could never have happened without the intervention of a time traveller and a well-placed phone call from his cousin, Marvin. But that’s the mind-blowing implication behind the joke: that here in the real world, Chuck Berry’s music was so groundbreaking that it only seems possible through science fiction.