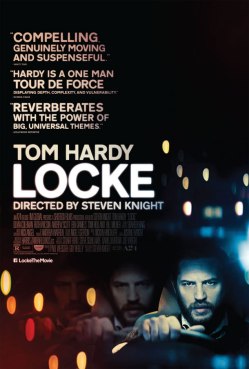 By Spencer. One of the more surprising (and satisfying) parts of growing up is that shift that happens when you realize you now enjoy the talking scenes in movies more than the ones where shit blows up. If you don’t know what I’m talking about, then you might want to skip Locke, the new one-man movie from director/writer Steven Knight and star Tom Hardy. Because while shit definitely blows up, it’s only in the dialogue and in the vivid emotions that Hardy and Knight squeeze out of one late night drive between Birmingham and London.

Locke is like no movie you’ve ever seen. Ever. If you’ve been missing the days of intelligent films for adults, make time on your summer movie calendar for something different, something … real.

Hardy (you probably know him best as Bane from The Dark Knight Rises) is a criminally underrated actor, and he serves notice in Locke that he means to change that. The storyline could so easily be passed off as a gimmick. Construction worker Ivan Locke makes a fateful car trip that will change his life, with the story unfolding through a series of Bluetooth phone conversations with the people most important to him. To give away any more of the plot would be to do you a disservice, because the excitement of the film comes from taking that ride with Locke and having no idea where it might lead.

So I’ll just say this: it’s Hardy’s performance that takes this movie from gimmick to greatness. It’s a bare and unflinching portrayal of a disciplined, ever-responsible man trying like hell to keep control of his life as it all comes apart. If Oscar doesn’t reward a performance like this, then just throw the award away because it’s lost all meaning.

The tension builds slowly like the turn of a screw, thanks to a tight script and streamlined direction by Steven Knight (screenwriter of 2007’s Eastern Promises, another underappreciated gem). And don’t overlook a series of superb voice-only supporting performances from the actors on the other end of the phone line – chief among them the always fantastic Andrew Scott (Moriarty on BBC’s Sherlock), who deserves to be a major star in his own right.

Locke may not be your typical summer movie. But in a time when inventive mainstream movies are almost a contradiction in terms, this one most definitely hits like an explosion.